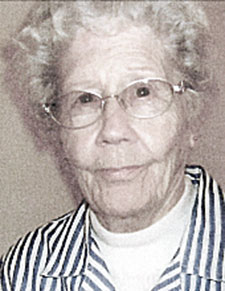 Mrs. Melba Dean Dickerson, age 90, a homemaker and longtime resident of the Bellwood Community died at 11:06 p.m. Sunday evening October 4, 2020 at the Wilson Manor in Lebanon where she had made her home since November 2, 2013.

Mrs. Dickerson was at the Carthage Chapel of Sanderson Funeral Home. Graveside services were conducted on Wednesday morning October 8th and burial followed beside her husband in the Gazebo Garden at the Dixon Springs Cemetery.

She was born Melba Dean Woodard on June 13, 1930 in Pleasant Shade and was one of three daughters of the late Joseph Cecil Woodard and Willie Preston Kemp Woodard. Her mother died on April 26, 1934 at the age of 26.

On March 9, 1949 she was united in marriage to Pleasant Shade native Luciean Lee “Dick” Dickerson in Ringgold, Georgia. He preceded her in death on September 11, 2013 at the age of 90 following over sixty seven years of marriage.

Following the death of her husband she sold their Bellwood Community farm and moved to the Southern Manor Assisted Living, now Wilson Manor.

Mrs. Dickerson was a member of the Lebanon Congregation of Jehovah Witness.