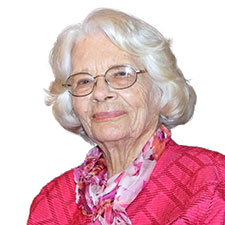 Mrs. Helen Royster, age 98 of the Dixon Springs Community, passed peacefully at the N. H. C. Maury Regional in Columbia at 2:25 a.m. Friday morning October 30, 2020 where she had made her home for five years.

Due to health concerns regarding Covid – 19, private graveside services were conducted Sunday afternoon November 1st at 2 p.m. and burial followed beside her husband in the Royster Family lot in the West section of the Dixon Springs Cemetery.

Her father was a former Stewart County Sheriff and served in World War I and was discharged with the rank of Sergeant and he and Mrs. Trinkle are buried in the Fort Donelson National Cemetery in Dover, Tennessee.

Mrs. Royster was a graduate of W. T. Thomas High School and the Nashville Business College.

She was united in marriage to Dixon Springs Community native Lt. William Lanas Royster on March2, 1946 upon his return from overseas service during World War II. Mr. Royster preceded her in death on September 12, 1965 at the age of 47 following only nineteen years of marriage.

Following their marriage they lived in Knoxville while he completed post graduate studies at the University of Tennessee and Mrs. Helen was employed in the business office at the Sears and Roebuck Co.

Following graduation they made their home on the Royster family farm and after the death of her husband she assumed an active role in raising beef cattle and growing tobacco.

Mrs. Royster was involved in agriculture, business, and community which led to be named “Smith County Woman of the Year” in 1976.

She was a Farm Bureau District Leader, a member of the Soil Conservation Service Committee, and a participant on the Tobacco Stabilization Advisory Board.

She was also a charter member and a member of the founding Board of Directors of the Cumberland Bank in Carthage, established in 1975.

Her Community involvement included being a 4-H Leader, P. T. A. Home Demonstration Club, and a volunteer at the former Smith County Memorial Hospital.

At the time of her death she was a member of the Chapel Hill United Methodist Church.

Mrs. Helen was a jovial lady, and it was always a delight to be in her presence.

She always had a positive outlook on life, no matter the circumstance, and possessed an infectious smile that could light up a room.

She never met a stranger and drew energy from being around others.

Her greatest joy in life was time with her family, especially her grandchildren and great-grandchildren to whom she imparted her independent spirit.

The Royster family has requested memorials to either the Carthage or Chapel Hill United Methodist Churches or Tennessee Farm Bureau, Ag in the Classroom program, P. O. Box 307, Columbia, TN 38402.