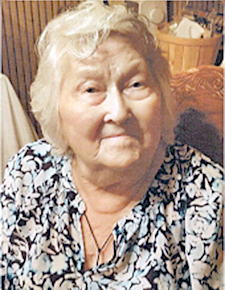 Mrs. Louise Gibbs, of Carthage, died two days following the death of her 60 year old son, Farris Len Gibbs, who died at their Jordan Street home Sunday morning December 13th. Mrs. Gibbs died at the age of 88 at the Vanderbilt Wilson County Hospital where she was admitted December 10th suffering from Covid. She was pronounced deceased at 8 p.m. Tuesday evening December 15, 2020.

Mrs. Gibbs was at the Carthage Chapel of Sanderson Funeral Home. Graveside services and interment were conducted from Circle Park at the Smith County Memorial Gardens at 11 a.m. Friday morning December 18th with her pastor, Eld. Rickey Day officiating. Burial followed beside her son and near her husband and great grandson.

She was one of seven children of the late Charles Ishmul Williams who died May 13, 1956 at the age of 43 and Emma Sue Christian Williams Brown Whitehead who died November 21, 2002 at the age of 89 and was born Margaret Louise Williams in the Buffalo Valley Community on July 23, 1932.

On October 21, 1951 in Hartsville she was united in marriage to Oak Grove Community in Macon County native, Arlis Lee Gibbs. He preceded her in death at the age of 78 on April 8, 2012.

Also preceding her in death was a great-grandson, Gage Alexander Gibbs who died February 24, 2016 at the age of 16.

Mrs. Gibbs was saved at the age of 70 in 2002 under the preaching, Eld. Jackie Stagner and was baptized into the full fellowship of the Calvary Missionary Baptist Church in South Carthage by Eld. Rickey Day.