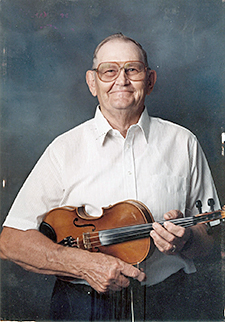 A renowned fiddle player, Mr. Risey Scruggs, died peacefully at the age of 98 Thursday evening February 18, 2021 at 9 p.m. surrounded by his family at his Circle Drive Hartsville home.

Funeral services from the Anthony Funeral Home were conducted Wednesday afternoon February 24th at 1 p.m. with Eld. Dean Dyer and Eld. Joe Porter conducting the services. Burial followed beside his wife in the West section of the Dixon Springs Cemetery.

His twenty one year old great-granddaughter, Bailey Danielle “Boo” Donoho died at the age of 21 on March 31, 2019.

Mr. Scruggs was saved and baptized into the full fellowship of the Goodwill Missionary Baptist Church where he had been a member for eighty years.

This notice provided as a courtesy to the Scruggs family.