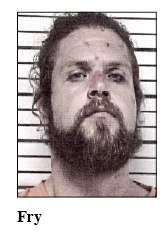 A man, who is accused of throwing three hatches at a stranger’s vehicle, ended in a standoff with a Carthage police officer, as he wielded two throwing knives.

The suspect eventually surrendered, but not before the officer drew his firearm and twice demanded the man drop the throwing knives. The incident began at a stoplight located at 111 Upper Ferry Road, when the man, who was the driver of a SUV, stood up and from the vehicle’s sunroof allegedly threw three hatchets at the vehicle behind him. The vehicle was stationary at the stoplight when the incident occurred.

A Carthage woman, whom he did not know, was inside the vehicle and contacted police. Minutes after the incident was reported, Carthage Police Officer Stephen Enoch located the suspect in the parking lot of Smith County Plaza (Save Way). When Officer Enoch ordered the man out of the vehicle, the suspect exited the dark colored SUV “aggressively” with two throwing knives in his right hand, according to Officer Enoch’s report.