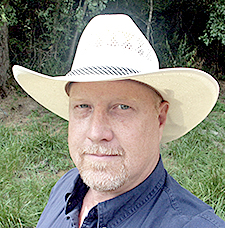 Joe Ware, Jr., passed away at his Hickman, Tennessee home on September 18, 2021, after a brief illness with Covid-19. He was born July 5, 1962, the second of three sons of the late Joseph Ware, Sr., and the late Mary Ware, of Jackson, Mississippi. He is survived by his brothers, Charles Ware of Jackson, and James (Kathy) Ware of Charleston, South Carolina, two nieces and a nephew, and extended family in Mississippi and Oklahoma.

Joe Ware attended Jackson Academy and Jackson Preparatory School, which provided him a strong educational experience and the basis for achievement, as well as introducing him to a few lifelong friends.  From his early years, he trained himself in the repair and modification of electric motors and small engines due to a natural fascination with how devices work. His ability and interests led to the tuning, rebuilding and replacement of automobile engines throughout  his secondary school years. Afterwards, he obtained both vocational training for formal education regarding aircraft engines and college for formal education in design and management of manufacturing processes, during which he completed training and obtained his private pilot’s license, earned his certification in airframe and powerplant repair and service, worked as an aircraft mechanic, and earned his engineering degree.

After receiving his degree in Engineering, Joe worked in Greenwood, MS, and then recruited  for quality control positions by multiple businesses, resulting in his decision to relocate to Tennessee and Smith County in 1988, to work for a manufacturing facility at Gordonsville, a choice influenced by the people, land and recreational opportunities the area provided. Within the next couple of years, he found the section of land which he determined would be his place for life. When corporate and contractual   decisions  vacated  the  manufacturing   plant,  he  remained,  having  recognized  his preference to have control over his own destiny by operating a small business in Gordonsville, before acceptance of a plant manager position in South Carolina for two years, and afterward, returning to reside permanently  on his land in 2001.

Joe enjoyed the peace and solitude which his Tennessee home offered, and resolved to follow a less- hectic direction in life. He engaged with several friends in Smith County and the surrounding area, as they provided  him  knowledge  and experiences  with farming,  cattle   raising, horsemanship, canning and cooking, and the meaning of establishing strong connections with good neighbors, some of whom pre-deceased him, and many who now mourn his loss of life, much too soon. A limited memorial service gathering for close friends and family in accordance of his request will be held on a future date to be determined.