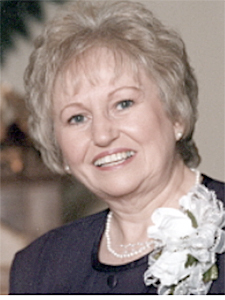 Mrs. Beverly Denton, age 79, of the Rock City Community died peacefully at 9:50 a.m. Friday morning November 12, 2021 at her Denton Lane home suffering from Parkinson disease and a short battle with lymphoma. She was under the loving care of Avalon Hospice of Cookeville who had been assisting her family with her care.
Mrs. Denton was at the Carthage Chapel of Sanderson Funeral Home where her funeral services were conducted by Bro. Lanny Thomas on Monday afternoon November 15th. Following the 1 p.m. services burial was in the Denton family lot in the Garden of the Cross at the Smith County Memorial Gardens.
The seventh of thirteen children born to the late William Jona Holmes who died July 26, 1975 at the age of 69 and Ruby Estel Sircy Holmes who died September 6, 1980 at the age of 68, she was born Beverly Jean Holmes in the Funns Branch Community of Jackson County on August 7, 1942.
Mr. Jona and Mrs. Ruby were united in marriage on May 10, 1927. Mrs. Denton was the tenth of the thirteen Holmes children to die.
Nine siblings preceded her in death; four sisters, Frances Eugene Holmes Martin, who died at the age of 88 on April 13, 2017, Etter Mazell Holmes Albritton who died at the age of 52 on November 3, 1987, Opal Estelle Holmes Martin who died at the age of 81 on December 12, 2014, Mary Holmes Munsey who died at the age of 55 on December 2, 2012, and five brothers, William Carl Holmes who died at the age of 82 on July 13, 2013, J. P. Holmes who died at the age of 61 on June 4, 2001, Paul Randale Holmes who die at the age of 60 on June 22, 2005, and W. J. Holmes who died at the age of 73 on January 25, 2021 and James Shepherd Holmes who was the first born child and died at the age of 3 days old in 1928.
At the home of the late Eld. Phocian Gibbs on February 10, 1962, she was united in marriage to Watervale Community native David Neal Denton.
Mr. and Mrs. Denton were preceded in death by a daughter, Marietta Lynn Denton McCaleb who died as a result of cancer on April 24, 2011 at the age of 44.
Mrs. Denton was a member of the Carthage Church of God.
She retired in 1999 from Robertshaw Industries in Carthage with twenty years of loyal service.
Surviving in addition to her husband Neal, of almost sixty years is their daughter, Sharon Denton Braswell and husband Jeff of the Watervale Community; son, David Denton and wife Daisy Comstock Denton of the Rock City Community; sister, Diane Holmes Smith and husband Jimmy of the Rome Community; two brothers, Jimmy Holmes and wife Wanda Dennis Holmes of the Hiwassee Community, John Holmes of Hermitage;; nine grandchildren; Monica Braswell of the Lock Seven Community, Cody Braswell and wife Jamie of Carthage, Bren Denney and husband Austin of Hartsville, Emily Denton, David Dwight Denton, and Deana Denton all of the Rock City Community, Jacob McCaleb and wife Lauren of the New Middleton Community, Jonah McCaleb and wife Stephanie of Gordonsville, Jeremiah McCaleb of the New Middleton Community; six great-grandchildren.