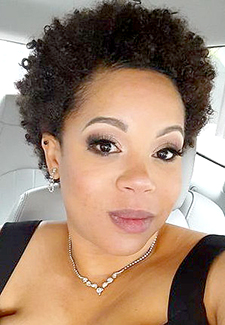 Ms. Lindsay Knox-Majors, of Murfreesboro, died in a single car automobile accident which occurred on Gracey-Herndon Road near I-24 East in Christian County, Kentucky on Saturday morning November 27, 2021. She was pronounced deceased at the scene at 12:19 a.m. and transported to the Kentucky Medical Examiner Office in Louisville, Kentucky.

The Knox-Majors family will receive friends at Sanderson in Carthage on Saturday morning December 11th from 10 a.m. until the 11 a.m. services.

Ms. Knox-Majors will then be cremated at Cumberland Family Services in Algood.

She was born Lindsay Danielle Anderson in Nashville on August 11, 1990 and was the daughter of Carthage native, Cynthia Diane “Cindy” Bell Anderson Boyd of Murfreesboro and Kenneth Owen Anderson of Nashville.

She was a 2008 graduate of Oakland High School in Murfreesboro and was a loan officer for Regions Bank.

At the Baker Chapel A. M. E. Church in Goodletsville she was united in marriage on April 6, 2019 to Justin Carvis Knox-Majors. The ceremony was performed by her bonus Dad, Pastor Woodrow Harris Jr.

Ms. Lindsay was preceded in death by her step-father, whom she dearly loved, Marshall Edward Boyd, who passed from this life on November 4, 2018 at the age of 58.

Surviving in addition to her husband and father and mother is Lindsay’s and Justin’s son, Julian Knox-Majors of Murfreesboro; sister, Toccara Spann and husband Rammon and their daughter Laila Spann of Atlanta, Georgia and a host of cousins and friends.