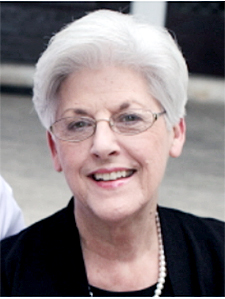 Mrs. Barbara Harville, of South Carthage, died at the age of 77 on Monday afternoon January 24th at 1:05 p.m. at her Lebanon Highway home with her family at her bedside following a brief battle with cancer. Barbara is now enjoying her rewards in heaven for a life well lived.

Her pastor, Pastor Scott Ezell assisted by Bro. Mike Ross will officiate at the 1 pm. Sunday afternoon January 30th funeral services from the Carthage Chapel of Sanderson Funeral Home. Burial will follow in the Garden of Everlasting Life at the Smith County Memorial Gardens.

The Harville family will receive friends at Sanderson in Carthage on Saturday from 2 p.m. until 7 p.m.

The youngest of two daughters born to the late James Horace Young who died September 26, 2008 at the age of 90 and Vallie Irene Winfree Young who died January 21, 2012 at the age of 94, she was born Barbara Ann Young at home on the family farm in the Enigma Community on February 10, 1944. She was reared in the Enigma and Chestnut Mound Communities except for a short time living with her family in Harlem, Georgia.

She was the granddaughter of the late Sam Ditty Young and Virginia Frances “Jenny” Waller Young and the late Herschel and Ella Rittenberry Winfree.

Mrs. Harville was a member and Salutatorian of the Smith County High School class of 1962. There she majored in business and mathematics. She was a member of the Beta Club, the Future Homemakers of America of which she was corresponding secretary her senior year, the high school chorus and spring festival, was the junior class treasurer and was co-editor with Emily Kemp Collins of the “Owl” annual yearbook her senior year. She was also voted by her classmates as the “Most Likely to Succeed”.

At the home of Rev. Joe Elledge in Dowelltown on June 5, 1965, she was united in marriage to Horseshoe Bend Community native Kenneth Allen Harville.

As a youth, Mrs. Harville was raised as a member of the Jack Apple United Methodist Church in the Enigma Community of which Rev. Elledge was the pastor.

Since 1975 Mrs. Harville was an active member of the Carthage Church of the Nazarene where she contributed her talents as pianist and vocalist.

For many years she was the office manager of the Petty-Green Clinic and later at the doctor offices at the new Smith County Medical Center attached to Smith County Memorial Hospital.

Following employment at the clinic in 1976 she began working in administration for the late Reggie Honey at the then W. R. K. M. radio in Carthage and also hosted a popular short daily segment known as Woman’s World.

On September 29, 1981 she began employment as the Federal Bookkeeper, Payroll Clerk and Human Resource Representative for the Smith County Board of Education central office, positions she held until her retirement in 2013 with a career total in education of almost thirty three years.

Affectionately nicknamed “Shorty” by her uncles as a toddler because she could walk upright under the dining room table, Barbara was more recently known as “Mimi” by her two loving granddaughters. They were “besties”. This was a role that she relished and fulfilled to absolute perfection.