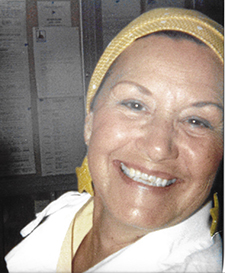 Mary was born on her family farm in Smith County, Tennessee, on April 27, 1933 to parents Frank and Kate (Lancaster) Gill.
After graduation from Gordonsville High School, Mary attended two years at University of Tennessee studying to be a pharmacist.  With family connections in Detroit, MI, Mary moved to the big city as a young woman and began work as a claims adjuster for Blue Cross Blue Shield and also as a ballroom dance instructor.  It was there at the dance studio that Mary met the love of her life and future husband, Michael Pagan. The two married in 1955 and were blessed with their daughter, Melissa. After his unexpected passing,  Mary found herself a working young widow with an eight year old daughter until a friend introduced her to a recently divorced man, Harold Dykes.  The two found their second chance at love and married in 1972.  Harold and Mary purchased a sailboat to enjoy the Great Lakes.  Once retired, they sailed “Mahame” from Michigan to Florida where Mary and Harold lived on their ketch enjoying the southwest Florida coast for over ten years.
Harold and Mary sold their boat in 1989 to return to Mary’s hometown in Tennessee to care for her elderly mother and to be closer to her younger sister, Emily.  The couple purchased and restored a large manor in Dixon Springs, TN and started an assisted living facility called “Historic Inn”.  Mary loved providing care and support for the many people of Smith County and often said that work was God’s calling and her “mission”.  After her husband passed in 2011, she relocated to Greenville, SC, to live with her daughter and spend time with her grandchildren.
Mary was a passionate animal lover who rescued numerous animals during her life. She had many beloved cats, dogs and birds, goats, and a pot-bellied pig named “Gertie”.   Mary always found a place in her heart for an unwanted animal.  Her sweet kitties Sissy and Lucky were by her side in her final days.
Her memories will be forever cherished by her daughter and son-in-law, Melissa J. and Ron Romano; two adored grandchildren, Mia Romano and Thomas Romano; and her beloved sister, Emily Steinberg-Cash.
In addition to her parents, Mary was predeceased by two loving husbands, Harold Dykes who passed in 2011, and Michael Pagan, the father of her daughter, who passed away in 1971; and a brother, Linden Gill.
Visitation will be held Tuesday, February 15, 2022 from 9:30 a.m. until 10:15 a.m. at Thomas McAfee Funeral Homes, Downtown followed by the Funeral Service at 10:30 a.m. A private committal service will be held following the service.
Family and friends who are unable to attend the service can view the Live Stream by clicking on the video link located on the obituary page at www.thomasmcafee.com.
In lieu of flowers, memorials may be made to COPD Foundation or your local animal shelter.
Condolences or your favorite memory of Mary may be left for the family by visiting www.thomasmcafee.com.