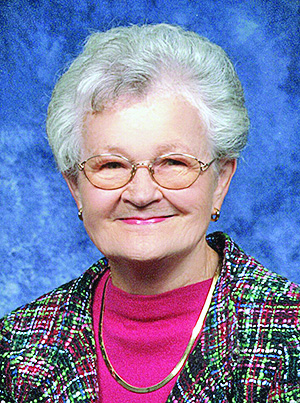 Mrs. Charlene Holleman Mofield, a homemaker of the Rock City community and co-owner of Mofield Bros. Construction Co., died peacefully at 3:39 a.m. Friday morning, November 18, 2022, at the TriStar Summit Medical Center in Hermitage where she was admitted November 8th. Mrs. Mofield was 93.

Funeral services were conducted Sunday afternoon, November 20th by her pastor of thirty seven years, Eld. Junior Dickerson, assisted by the Mofield family’s close friend, Bro. Jimmy Gregory. Following the 3 p.m. service from the Carthage Chapel of Sanderson Funeral Home burial followed beside her husband in the Mofield family lot in the Garden of Everlasting Life at the Smith County Memorial Gardens.

A daughter-in-law, Tammy Caplenor Mofield, preceded Mrs. Charlene in death at the age of 59 on December 12, 2021.

In Rossville, Georgia on August 28, 1945, she was united in marriage to Rawls Creek community native John Martin Mofield, who preceded her in death, following over sixty five years of marriage, on October 28, 2012 at the age of 87.

Following graduation from Gordonsville High School in the class of 1946 she went to Nashville to work for The General Shoe Corporation and following marriage was employed with the W. E. Stephens Manufacturing Company in Carthage.

Later she began employment with the Lux Time Division of Robertshaw Industries in Lebanon and then transferred to Carthage where she retired in 1992.

Mrs. Mofield was saved at the age of 29 and was baptized into the full fellowship of the Plunketts Creek Missionary Baptist Church by the late Eld. Edgar Brown and there she was the oldest living member of the congregation.

The Mofield family has requested memorial to the Plunketts Creek Missionary Baptist Church.