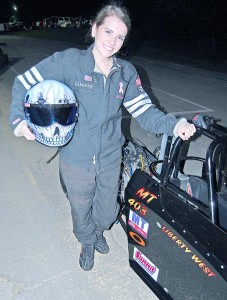 Just as Smith County and Gordonsville High football players were about ready to shuck their helmets after knocking heads in the classic cross-county rivalry on a recent Friday night, 15 miles down the road, 88-pound Liberty West was buckling on her headgear.

The brown-haired, blue-eyed West, who stands 4-foot-11, was psyched up and preparing to make her first run of the night at Middle Tennessee Dragway in her sleek, 15-foot-long, black fiberglass dragster.

Liberty, who does not yet have her motor vehicle license, says she has no fear while zipping straight down this one-eighth-mile strip of asphalt as she approaches a speed of 75 miles per hour in less than nine seconds.

“I try not to think about it. I just try to drive straight and make sure I make it from A to B,” said the Smith County High School sophomore, who was a cheerleader in middle school but gave up that sport for Friday nights beneath the lights at the racetrack, a place that erupts with the ear-splitting noise of revved-up engines and emits the smells of burnt rubber and spent fuel.