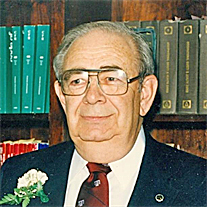 Jessie Doyle Eastes, 84, died Monday, Sept. 5, 2016.
Memorials: In lieu of flowers donations may be made to the Diabetic Association of Texas.
Doyle was a native of Smith County, Tenn. One of nine children, He was born Dec. 13, 1931, and grew up in Brush Creek, Tenn., and remembered attending a one room rural elementary school. He graduated from Tennessee Technological University with a Bachelor of Science in Physics, 1954. Continuing his education at Vanderbilt University, Nashville, he secured a National Science Fellowship to study Health Physics at Oak Ridge, Tenn. This was the time of the Russian launch of the Sputnik and the development of scientists was seen as paramount to U.S. national security. Vanderbilt University, Nashville, awarded him the Master of Science, 1960.
Doyle was employed by Lockheed Martin Corporation, Fort Worth Division for 42 years. Beginning employment as a Health Physicist, he later secured certification in the comprehensive practice of Industrial Hygiene by the American Board of Industrial Hygiene and was certified by the Board of Certified Safety Professionals. He was a past president of the North Texas Chapter of the Industrial Hygiene Association, 1979, and was recognized as a 50 year member of the American Health Physics Society.
He was a member of University Baptist Church for over 50 years. Doyle married Loveta Green in W. Ray Watson Chapel in 1963. They had a son, Arthur Eastes. Some of his favorite memories are participating with his son in activities of Boy Scout Troop 326, Ridglea Presbyterian Church. He served as treasurer and camp cook. He was loving and involved dad whether it was camping or warming a bench at his son’s soccer games.
Doyle was preceded in death by his parents, Earl Franklin and Ona Lee Dedmon Eastes; as well as three brothers, Dr. Frank Eastes, Ray Dell Eastes, and James E. Eastes.
Survivors: Wife, Loveta Eastes; son, Art and wife, Rhiannon; brother, Billy and wife, Sara; sisters, Julia Watts, Carolyn Askew and husband, Jim, Eleanor Andrews and husband, Will, Jean Heidel, Linda Eastes, and Joann Eastes of Spartanburg, S.C.; brother-in-law and sister-in-law, Lynn and Dorene Williams of Granbury; and numerous nieces, nephews and cousins.

Visitation with the Eastes Family will be held on Sunday, September 11, 2016 from 5PM until 7PM at the Greenwood Chapel of Greenwood Funeral Home and Cremation at 3100 White Settlement Rd, Fort Worth, TX, 76107. Obituary online at www.greenwoodfuneralhomes.com

This notice provided as a courtesy to the Eastes Family.