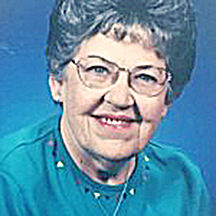 Ila was born on July 18, 1925 to Myrtle and Eva McKinney in Gordonsville, Tennessee. Ila married her husband, Frank Osborne, in 1946 in Nashville, Tennessee. He precedes her in death (1979).

Ila enjoyed quilting and sewing, gardening, camping, and fishing. She was also an avid reader. She was a member of Judson Road Church of Christ. Ila worked at the Kokomo Tribune as a printer for 32 years. She was a past president of the Printer’s Union.

Ila is preceded in death by her husband, Frank Osborne; 8 brothers, and 2 sisters.

Funeral Services for Mrs. Osborne were conducted from the Ellers Mortuary Webster Street Chapel, 3400 South Webster St. Kokomo, Indiana, on Wednesday, September 28, 2016 at 11AM. Interment will follow in the Kokomo Memorial Park Cemetery.

Visitation with the Osborne family was held at the Ellers Mortuary Webster Street Chapel on Tuesday, September 27, 2016 from 4PM to 8PM.

This notice provided as a courtesy to the Osborne Family.