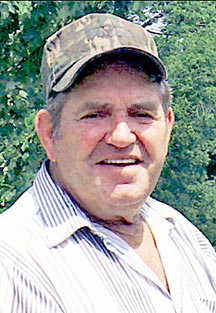 Mr. Kerr Woods age 82, a farmer of the Rawls Creek Community, died at 7:28 a.m. Friday morning December 16, 2016 at his Rawls Creek Road farm. He had been under the care of High Point Hospice since November 17th and they pronounced him deceased at 9:34 a.m.

At the home of the late Lewis and Lorena Caplenor in the Rome Community, he was united in marriage to Rawls Creek Community native, the former Sue Dean Flippen. They were married on January 23, 1959 by then Rome Baptist Church pastor Bro. Vance King.

A non-denominational Christian, Mr. Woods was saved in youth at a revival meeting at The Baptist Church of Christ in the Club Springs Community, but never united with a church.

After thirty five years of service, Mr. Woods retired in 1997 from the Ross Gear Division of the T. R. W. Company in Lebanon where he began employment in 1962.

Surviving in addition to his wife of almost fifty seven years is a son, Sherrill Woods and Melissa and her daughter Sabrina Goodall of the Rawls Creek Community; a granddaughter, Danielle Woods Huffines and husband Spencer of Baxter; step-grandson, Shawndell McKinney and his daughter Tia McKinney.