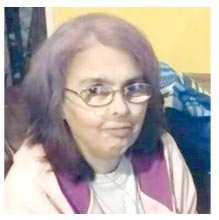 Mrs. Nedrow was born December 2, 1963 in Ithaca, NY, a daughter of Kathleen VanDyke and the late Irvin Pete Hurd. She married to Ronald D. Nedrow on January 7, 1983. She was a former employee of KFC.

Mrs. Nedrow’s remains rest at the Gordonsville Chapel of Bass Funeral Homes where a Celebration of Life is scheduled to be conducted Friday, December 30, 2016 at 3PM with Bro. Billy Woodard officiating.

Mrs. Nedrow’s family will receive friends at the Gordonsville Chapel of Bass Funeral Homes on Friday, December 30, 2016 from 1PM until service time at 3PM.

In lieu of flowers, the family requests donations be made to assist with funeral expenses.