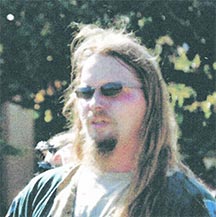 Zebariah Seth Fox passed away January 21, 2017 at the age of 36, surrounded by friends and family in Vancouver, Washington, from complications of a stroke.
Born October 28, 1980 in Naples, Florida, Seth moved  to  Macon County in the spring of 1981.  He attended Pleasant Shade Elementary and graduated Valedictorian of Macon County High School in 1999.    He received an associates degree from Tennessee Technological University.   He had a 4 year apprenticeship as a journeyman steamfitter/pipefitter in Arizona before moving to Longview, Washington.  He was a steamfitter/pipefitter with UA Local 26.   He worked at San Onofre, Enrico Fermi, Columbia Nuclear Generation Stations and numerous other places, including as a detailer at UA Local 290.  He was a Mason.  He was in Amtgard belonging to the Kingdom of Northern Lights the 18th Kindom.  Clan of House of Rosewood and House of eclipse.
He was a loving son, brother, uncle, grandson.  He was the son of Alyson Fox of Sycamore Valley and Dan Fox.  His sisters are Sherrie McCandless and husband, Chris Sheppard, Jenifer Fox; brother, Danny Fox; aunts and uncles, Winnie & David Burkett, Gail & Cliff Sondergaund; grandparents, Mr. & Mrs. Thedore Below, Mr. & and Mrs. Richard Fox; numerous cousins, nieces, nephews.  He never met a stranger.  He will be missed by many.
The family will have a Celebration of Life on the farm in the spring.
Crown Memorial Center, Portland OR