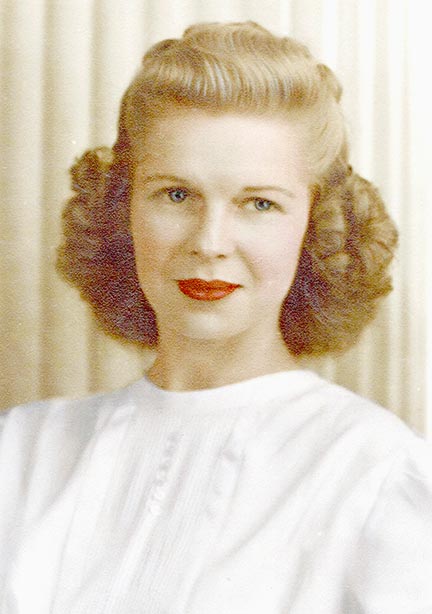 Mrs. June Bennett of Brush Creek, TN passed away on Tuesday, February 14, 2017 at the Webb House in Smithville, TN, where she has lived since 2010. Mrs. Bennett was 93 years of age.

Mrs. Bennett was born June 17, 1923 in St. Louis, MO to Thomas and Rella Anderson. She grew up in Knoxville, TN with brothers Thales, Rolland, and Roger. At the beginning of World War II, Mrs. Bennett became one of the Government Girls. She, along with many young women from around the country, left her home and went to Washington DC to fill positions needed for the war effort. There she met and later married a young soldier, Mr. George Emerson Bennett of Brush Creek, TN. The Bennett family lived in Knoxville, TN, Marrietta, GA, and Huntsville, AL before settling in Brush Creek, TN in the early 1970s.

Mrs. Bennett has always been active in her community. She has shared her time and talents in many different ways over the years by volunteering with the Brush Creek United Methodist Church, the Brush Creek Community Club, the Home Demonstration Club, and other local organizations.

Mrs. Bennett was preceded in death by her husband, George Bennett, who died in 2001, and by her son, Dr. David Bennett, Sr., who passed away in 2008. She is survived by her daughter, Pam Bennett Throne and her brother, Roger Anderson. Mrs. Bennett will be deeply missed by her son-in-law, Ken Throne, and her daughter-in-law, Mrs. Karen Bennett as well as by her grandchildren David Bennett, Jr. with his wife Michella, Dr. Martha Bennett, Melissa Ransom Bennett Schwerzler with her husband Martin, Ryan Gordon Throne, and Brittany Throne and her as her great-grandchildren Cora, Emerson, and Claire Bennett and Cole and Sabrina Schwerzler.

The family would like to express our deepest gratitude to all of the staff of the Webb House who have given Mrs. Bennett such considerate and loving care for so many years.

Funeral Services for Mrs. Bennett are scheduled to be conducted from the Gordonsville Chapel of Bass Funeral Homes on Friday, February 17, 2017 at 1PM with Bro. Floyd Massey officiating. Interment will follow in the Union Hill Cemetery.

Visitation with the Bennett family will be on Thursday from 6PM until 8PM and again on Friday after 12 Noon until service time at 1PM.