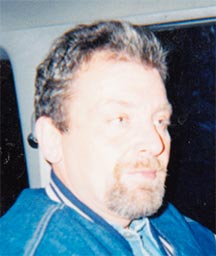 Terry was born March 6, 1963 in Trenton, Michigan, the son of Clifford and Molly Damron.  He moved to Gallatin in 1992 where he was employed by Garrot Bros. Concrete.

Terry was a muscle car enthusiast and was especially fond of classic Chevelles and Monte Carlos.

He is survived by both parents, Molly and Clifford Damron, and his only sibling, brother, Cliff Allen Damron.  Also surviving is a niece, Amanda Damron; aunts, Bertha Newsome, Jean Hall, Deliah Akers and Mary Akers.  In addition, he is survived by numerous loving cousins and devoted friends.

A memorial service will be held Saturday, March 11, 2017 at 1 PM at the Chapel Hill United Methodist Church in Riddleton with pastor, Dr. Charles Smith, officiating.