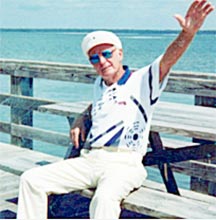 Mr. Otto was born August 27, 1920 in Patterson, NY, the son of the late Cornelius Hage Otto, Sr. and Maud Wright. Mr. Otto married Marion Haigh on June 21, 1947 in Brewster, NY. He served his country in the U.S. Marine Corps during World War II, enlisting in September of 1942 in Albany, NY, and receiving an honorable discharge in September of 1946. While in the Marines, Mr. Otto obtained rank of Private First Class and served in the Pacific Ocean at the Solomon Islands and in the Occupation of China among various others. Mr. Otto attended Cornell University. He worked for IBM as a technician building circuit boards for twenty-five years until his retirement. He later worked for Food Lion for another twenty years.

Mr. Otto had a beautiful tenor voice and participated in the IBM Glee Club and at functions in Jensen’s, where he lived in South Carolina. He was an avid tennis player, and enjoyed this activity well into his senior years. Mr. Otto played softball with the IBM Teams and was an excellent bowler. He was a Baptist, growing up the son of a Baptist Minister.

Funeral Services for Mr. Otto are scheduled to be conducted from the Carthage Chapel of Bass Funeral Homes on Thursday, March 23, 2017 at 12 Noon with Rev. John Wesley Vaughan officiating. Interment with Military Honors will follow in the Smith County Memorial Gardens.

Visitation with the Otto family will be held at the Carthage Chapel of Bass Funeral Homes on Thursday 10AM until service time at 12 Noon.

The Otto Family requests donations be made to Gentiva Hospice.