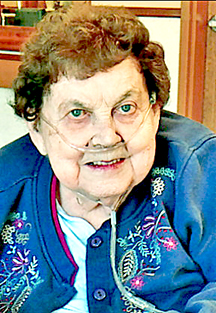 Mrs. Pauline Bush York, age 90, a longtime resident of Dr. James Fisher Circle in the Rome Community, died at The Pavilion in Lebanon at 2:20 p.m. Friday afternoon March 31, 2017. She had made her home there since June 24, 2014 suffering from pulmonary lung disease.

Mrs. York was at the Carthage Chapel of Sanderson Funeral Home where her funeral services were conducted Tuesday afternoon April 4th. Bro. Jimmy Gregory who grew up as her neighbor, officiated at the 3 p.m. services. Burial followed beside her first husband in the Garden of the Cross at Smith County Memorial Gardens.

On March 3, 1947 she was united in marriage to Maggart Community native J. C. Bush Jr. who preceded her in death on June 13, 1992 at the age of 65 following just over forty five years of marriage.

Mrs. York began employment with the Carthage Shirt Corporation when it began operation in 1953 and retired in 1991 following thirty eight years of loyal service.

As long as health permitted, Mrs. York had been a faithful and dedicated member of the Rome Baptist Church since the late 1940’s.

The family requests memorials to the Rome Baptist Church.