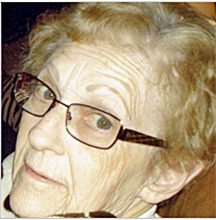 Mrs. Rosa Nell was born November 21, 1927 in the Dekalb County, TN, the daughter of the late John Agee and Mary Sandlin. She was also preceded in death by Three Brothers; Odell Agee, Glades “Doak” Agee, and Clarence Agee. She married Billy Edward Thomas and he preceded her in death on April 8, 1988. Mrs. Thomas attended the Brush Creek Church of Christ. Mrs. Rosa Nell worked at the Carthage Shirt Factory, Welch Manufacturing, and M&M Variety. She and her husband worked as janitors at the Gordonsville High School. She finished her working life at Wal-Mart, working in the receiving department and even working nights up until she turned 80.

Funeral services for Mrs. Thomas were conducted from the Gordonsville Chapel of Bass Funeral Homes on Thursday, April 13, 2017 at 2PM with Glenn Ramsey officiating. Interment followed in the Gordonsville Cemetery.

Visitation with the Thomas family was held at the Gordonsville Chapel of Bass Funeral Homes on Wednesday from 2PM until 8PM and on Thursday after 11AM until service time at 2PM.