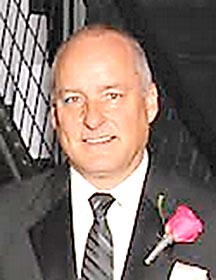 On September 6, 1980, at the home of his parents, he was united in marriage to Newnan, Georgia native, the former Patti McWaters.

He had a thirty year career with the Corps of Engineers at the Cordell Hull Dam where he served as a hydro-electric plant operator before retiring in 2014.

Mr. Morris was a member of the Cornerstone Baptist Church at Tanglewood.

The Morris family requests memorials to the Jordan Hackett Foundation.