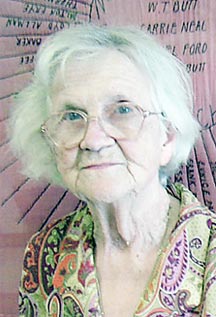 Pastor Drew Smith officiated at the 1 p.m. Saturday afternoon August 5th funeral services from the Carthage Chapel of Sanderson Funeral Home. Burial followed beside her husband in the Garden of the Cross at Smith County Memorial Gardens.

She was the fourth of seven children born to the late Robert Bertram McDonald and Beulah Lee Timberlake McDonald and was born Virginia Elizabeth McDonald in Gordonsville on September 14, 1920.

On June 16, 1939 in Tompkinsville, Kentucky Mrs. Wilkerson was united in marriage to Bluff Creek Community native Roy William Wilkerson. He preceded her in death on December 11, 2004 at the age of 90 following over sixty five years of marriage.

Mrs. Wilkerson was a 1938 graduate of Gordonsville High School where she excelled as a Tigerette on the girls basketball team and served as captain playing defense..

She began employment at the Carthage Shirt Corporation when it opened in 1953 and was employed there for forty years before retiring when it closed in 1993.

Mrs. Wilkerson was of the Baptist faith and for many years she and her husband attended Cedar Point United Methodist Church and she also attended several Baptist churches.

She is survived by her daughter and son-in-law, Janice Wilkerson Taormina and Larry K. Taormina of Huntsville, Alabama.