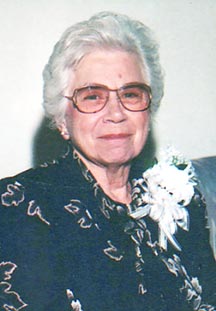 Mrs. Annie J. Massey, a homemaker of the Hiwassie Community died at 1:53 p.m. Wednesday afternoon August 23, 2017 at the Southern Manor Living Center in Lebanon where she had made her home since October of 2012. Mrs. Massey was 93.

Her longtime minister, Stan Stevenson, officiated at the 1 p.m. Saturday afternoon funeral services from the Carthage Chapel of Sanderson Funeral Home. Burial followed beside her husband in the Garden of Christus at Wilson County Memorial Park in Lebanon.

In Carthage on September 26, 1942, she was united in marriage to Joseph Albert Massey who preceded her in death on July 16, 1987 at the age of 66 following only forty four years of marriage.

Mrs. Massey was a member of the 1942 graduating class of Trousdale County High School.

She had been a member of the Rome Church of Christ for more than sixty years.