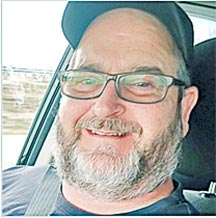 Mr. Lafever was born August 2, 1963in Carthage, TN, the son of Freda Mai Bennett and the late H.L. Lafever. He was also preceded in death by Brother-in-Law; Michael Dunham. Jacky was a 1981 graduate of Gordonsville High School. He married Tammy Lou Dunham on May 10, 1985. He worked as a truck driver and equipment operator, most recently for the Smith County Highway Department. Jacky was saved at an early age. He was always kindhearted and was a loving person, husband, father, and grandfather.

Funeral Services for Mr. Lafever were conducted from the Gordonsville Chapel of Bass Funeral Homes on Sunday, August 27, 2017 at 2PM with Bro. Tim Bennett officiating. Interment followed in the Pleasant Shade Cemetery.

Visitation with the Lafever family was held at the Gordonsville Chapel of Bass Funeral Homes on Saturday from 2PM until 8PM and again on Sunday from 11AM until the time of the service at 2PM.