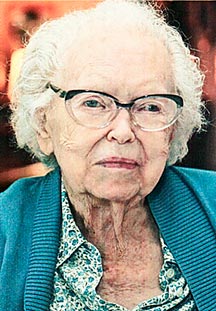 A retired Carthage businesswoman and wife of a former Carthage Mayor, Mrs. Pat Honey, has died at the age of 97. Death came at 10:15 a.m. Tuesday morning September 5, 2017 at the Riverview Regional Medical Center in Carthage where she was admitted Friday afternoon August 25th.

Rev. Monica Mowdy, pastor of the Carthage United Methodist Church, officiated at the 3 p.m. Friday afternoon September 9th funeral services from the Carthage Chapel of Sanderson Funeral Home. Burial followed beside her husband in the Garden of the Cross at Smith County Memorial Gardens.

Mrs. Honey was born Pansy Lee Basket on October 13, 1919 in the Blue Springs Community of Roane County and was one of five children of the late Charlie Franklin Basket and Christian Scott Gibboney Basket.

Siblings preceding her in death was a sister, Faith Baskett and three brothers, Gene, Jack and Bill Baskette with all the siblings spelling their family names different to their father.

In 1959 they moved their family to the McClellan-Williamson house on North Main Street in Carthage and together they formed the W. R. K. M. radio station where Mr. Honey was the engineer and manager and Mrs. Pat was in charge of all the administrative functions of the Carthage Broadcasting Co. They sold the station in 1989.

Mrs. Honey was of the Methodist faith.

The Honey family requests memorials to either the Carthage United Methodist Church or the St. Jude Children’s Hospital in Memphis.