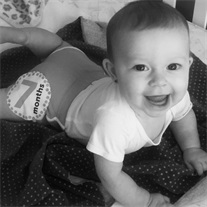 Kayleigh was born February 1, 2017 to Dayton Hugh Matthews and Kayla Michelle York Matthews of Hartsville, TN. She was loved by so many and will be missed dearly.

Along with her parents, Kayleigh is survived by three sisters; Paisley York, Alivia Matthews, and Naomii Matthews. Grandparents; Tabitha and Carl York of Ashland City, TN, and Diane and Clyde Lord of Hendersonville, TN. Great-Grandparents; Dean and Walt Cook of South Carthage, TN, and Jacky and Vickie Thomas of Pleasant Shade, TN.

Celebration of Life Services were conducted from the Creekside Fellowship at 101 Harsh Ln, Castalian Springs, TN 37031 on Saturday, September 16, 2017 from 12 noon until 2PM with Pastor Roger Luther officiating.