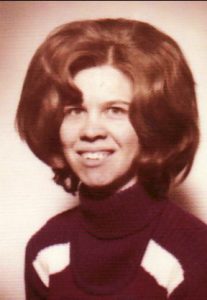 Mrs. Judy Hale Ratcliff, a homemaker of the Halls Hill Community, died at 1:45 p.m. Friday afternoon September 15, 2017 at the St. Thomas Hospital West in Nashville at the age of 70. She was first diagnosed with lymphoma in September of 2007.

She was also preceded in death by their son-in-law, Matthew Brian Givens who collapsed of a heart attack on February 18, 2015 at the age of 37 while working a shift at the William L. Bonnell Co. in Gordonsville.

She received a General Education Degree from the Wayne County School system and a degree in cosmetology from Virginia Farrell School of Cosmetology.

On November 12, 1965 she was united in marriage to Georgia native James Franklin “Frankie” Ratcliff. The wedding vows were at the Desoto Street Michigan home of Willis “Shorty” Petty and with his late wife Nettie Ileen Silcox Petty as the witness.

As long as health permitted Mrs. Ratcliff attended the Carthage Church of God.

Surviving in addition to her husband of almost fifty two years is their daughter, Karen Ratcliff Givens of the Halls Hill Community; grandson, Dillon Givens; brother, James Hale and wife Mary of Carthage.