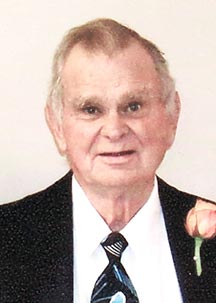 Mr. Gerald Givens of South Carthage died at the age of 92 at 3:44 p.m. Wednesday afternoon October 11, 2017 at the Riverview Regional Medical Center in Carthage. He had enjoyed good health and was admitted to the hospital Friday afternoon October 6th suffering from congestive heart failure.

Saturday afternoon October 14th funeral services were conducted by Eld. Rickey Scurlock at 1 p.m. from the Carthage Chapel of Sanderson Funeral Home. Burial with military honors followed beside his wife in the Garden of Gethsemane at Smith County Memorial Gardens.

Mr. Givens was united in marriage on April 15, 1950 to the former Polly Ruth Dickens who died January 27, 1990 at the age of 61, following almost forty years of marriage.

Mr. Givens was one of a few Smith County United States Army World War II veterans surviving and was honorably discharged with the rank of Private at Fort Oglethorpe, Georgia on April 4, 1946.

He was a charter member of the South Carthage Fire Department when it was established in 1963.

Mr. Givens was saved as a young man at the old Sullivans Bend Baptist Church and attended the Franklin School in Sullivans.

He was employed for about thirty years with the Waggoner Oil Co. in South Carthage and worked mostly at Waggoner’s Service Station which was located at the intersection of then Highway #53 and U. S. Highway #70 and now Main Street South and Cookeville Highway.