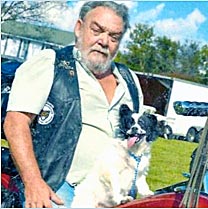 Graveside services and interment for William “Bill” Seeback, 68 of Elmwood, were Monday, October 23, 2017 at 2:00 PM at Dickens Cemetery in the Maggart community of Smith County.  Harold Ralph Maynard officiated.
Mr. Seeback died Friday, October 20, 2017 at Riverview Regional Medical Center in Carthage.  He was born November 10, 1948 in Detroit, Michigan to the late Alvin and Jenny Hinton Seeback.
In addition to his parents, he was preceded in death by his first wife, Ellen Ann Blair Seeback, on July 20, 2005.
He was a retired machine repairman with the Budd Company of Detroit with over 25 years of service.  He enjoyed riding his Harley Davidson motorcycle, fishing and taking care of his family.
Survivors include his wife, Sallie Fox Chaffin, of Elmwood, daughter and son-in-law, Cheryl and James Thomas, of Elmwood, son and daughter-in-law, William Lee and Jaime Seeback, of Chesterfield, MI, grandchildren, Niki Dust of Murfreesboro, Erin Seeback and Jason Seeback, both of Chesterfield MI.
Baxter Chapel of Hooper-Huddleston & Horner Funeral Home is in charge of arrangements (931)858-2134.

You may share your thoughts and memories at www.hhhfunerals.com