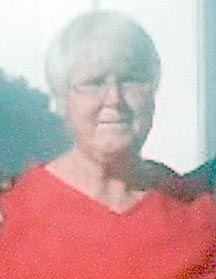 Mrs. Evelyn Mofield, a housewife of the Rawls Creek Community, died at the age of 68 at 9:05 p.m. Monday evening December 25, 2017 at the Tennova Healthcare in Lebanon where she was admitted November 27th suffering from kidney and heart ailments.

Eld. Junior Dickerson officiated at the 1 p.m. Thursday afternoon December 28th funeral services from the Carthage Chapel of Sanderson Funeral Home. Burial was in the Mofield family Cemetery on the Jesse Lee Poston farm in the Rawls Creek Community.

She was born Evelyn Louise Lucas in Nashville on April 21, 1949 and was the daughter of the late Oliver and Katherine Haynes Lucas.

In Carthage in 1969 she was united in marriage to Rawls Creek Community native, Larry Wayne Mofield.

In 2006 she was saved and baptized at the West Main Baptist Church in Alexandria by then pastor Bro. Jeff Hicks.

Surviving in addition to her husband of over forty eight years are their two children, Michelle Mofield Taylor and husband David Sr., Tim Mofield and wife Rhonda all of the Rawls Creek Community; thirteen grandchildren and seven great-grandchildren.