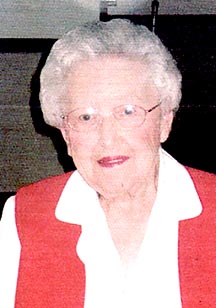 Mrs. Gertrude Cornwell of Gallatin and a longtime resident of the Riddleton Community, died at 4:15 p.m. Thursday afternoon December 28, 2017 at the Gallatin Healthcare Center. Mrs. Cornwell was 94 years of age.

On January 29, 1948 Mrs. Cornwell was united in marriage to Elmwood Community native Frank Wilson Cornwell who died at the age of 84 on December 5, 1994 following almost forty seven years of marriage.

Mrs. Cornwell was saved at the age of 10 under the preaching of the late Eld. Calvin Gregory and was baptized into the full fellowship of the Maces Hill Missionary Baptist Church where she had remained a faithful member for over eighty four years.

Before the closing of the former Cox-Davis School at Riddleton, she cooked in the kitchen for several years and later was employed for over twenty years at the former Carthage Shirt Corporation.

Mr. and Mrs. Cornwell moved from Riddleton to Gallatin in 1987.