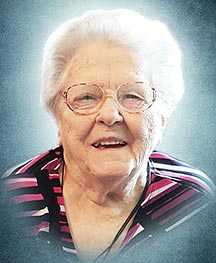 She was born August 18, 1927 to Robert Taylor and Era Gill Taylor Webb.  In addition to her parents, she was preceded in death by her husband of 52 years, Will T. Fish; two sisters, Eufaula Turner and Ofala Watson; granddaughter, Torie Danyell Stacey.

Ms. Bobbye Ruth was a retired shirt factory worker and a member of the Smithville Church of God.

In addition to flowers, the family asks donations be made to the Smithville Church of God Building Fund in memory of Ms. Bobbye Ruth.

DeKalb Funeral Chapel is in charge of the arrangements.