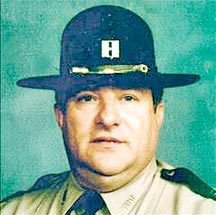 Funeral services for Ralph Sammy Swift, age 75, of Nashville will be held Friday, January 26th, 2018 at 12:00 pm  in the chapel of Presley Funeral Home with Mark Loftis officiating.

Ralph Sammy Swift passed away at 2:15am on Tuesday, January 23, 2018 at Life Care Center of Old Hickory in Old Hickory, Tennessee.

He was born Thursday, February 12, 1942 in Cookeville, Tennessee to late Wylie Swift and Aline Bullington Swift.

Mr. Swift attended Cookeville Central High School and joined the Tennessee Highway Patrol in 1964.  During his 39 years of service, he attained rank as Captain.  Ralph was active with the Nashville Fraternal Order of Police, Lodge 42, and served as both Vice President and President.  He was also active with the Tennessee Highway Patrol Retired Officers Association and served as Vice President and President as well.  He was a member of Blue Knights and Harley Owners Group (HOG).

In addition to his parents, Ralph is preceded in death by his brother, Wylie Swift, Jr., and brother, William Bailey “Bill” Swift.

Pallbearers will be Tennessee Highway Patrol.

Ralph personally has requested that in lieu of flowers, donations be made to the Tennessee Highway Patrol Retired Officers Association, PO Box 437, Hermitage, TN 37076

You may share your thoughts or send condolences to the family by visiting http://www.presleyfuneralhome.com.