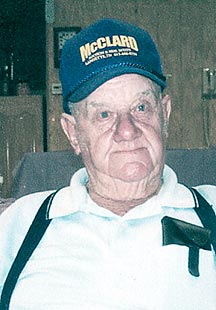 Lifelong Dixon Springs Community farmer, Mr. James C. Dickens died at 1:11 a.m. Friday morning January 26, 2018 with his family at his bedside at Alive Hospice at the Skyline Madison Campus where he was admitted only hours earlier from the Nashville Veterans Administration Hospital. Mr. Dickens was 87.

Funeral services were conducted from the Carthage Chapel of Sanderson Funeral on Sunday afternoon January 28th at 3 p.m. with his son-in-law Eld. Jerry Driver and his grandson Bro. Stetson Hall officiating. Burial followed in the T.V.A. section at the Dixon Springs Cemetery. One of only two children, he was born James Chesley Dickens in the Dixon Springs Community on June 28, 1930 and was the son of the late Marvin Johnson Dickens who died at the age of 67 on April 14, 1973 and Maggie Dee Dias Dickens who died at the age of 79 on October 30, 1984.

He was preceded in death by a sister, Annie Douglas Dickens Claridy who died June 6, 1999 at the age of 76.

Mr. and Mrs. Dickens sadly lost a son to cancer on September 9, 2015 at the age of 55. Phillip Anthony (Dobie) Dickens died at his Wilburn Hollow home with his family at his bedside.

Mr. Dickens proudly remembered his being saved as a boy at an October revival meeting at the Dixon Creek Missionary Baptist Church and was then baptized into the full fellowship of the church where he remained a faithful member until his death.

He proudly served our country with the United States Army during the Korean War and was honorably discharged with the rank of Private First Class at Camp Pickett, Virginia on May 17, 1952.