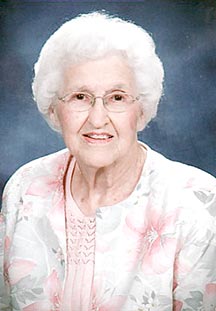 Longtime Carthage City Recorder Mrs. Goldna Clay died at the age of 97 at 2:15 p.m. Thursday afternoon January 25, 2018 at the Quality Care Center in Lebanon where she had resided since December 30th of 2017.

Her former pastor of over forty nine years, Eld. Charles Allen Gentry, and her present pastor, Eld. Anthony Dixon, officiated at the 3 p.m. Saturday afternoon January 27th funeral services from the Carthage Chapel of Sanderson Funeral Home. Burial was beside her husband in the Garden of the Cross at Smith County Memorial Gardens.

On December 27, 1939 she was married to Difficult Community native James Carrington Clay. He preceded her in death on May 21, 1972 following 20 years as Carthage Mayor ending in 1990.

Between her serving in the Trustees office and the Town of Carthage office, she was employed in the office of the Upper Cumberland Electric Membership Corporation.

Following her retirement she served as a volunteer at the former Smith County Memorial Hospital, now Riverview Regional Medical Center.

During her adult life Mrs. Clay was a devoted attendee of the North Carthage Missionary Baptist Church.

She was a member of Carthage Chapter # 190, Order of the Eastern Star and a graduate of Smith County High School.

The Clay family has requested memorials to the Jordan Hackett Foundation.