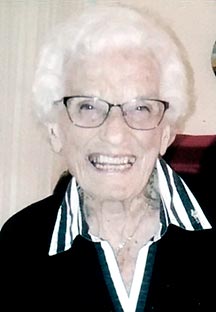 Mrs. Elizabeth Kemp died at 2:10 p.m. Monday afternoon February 5, 2017 at the age of 94 years, 11 months and 27 days, just four days shy of her 95th birthday. Her family was at Riverview Regional Medical Center in Carthage at her bedside when the death angel came and carried her into heaven.

A sister, Wynell Bellamy of Huntingdon Beach, California died April 20, 2006 at the age of 87and a brother Hollis Whitley preceded Mrs. Kemp in death.

Her husband and the father of their five sons, Arthur Draper Kemp, died on December 13, 1957 at the age of 40.

Mrs. Kemp was saved at the age of 35 at a revival meeting being conducted by Eld. R. D. Brooks and Eld. H. C. Vanderpool and on June 11, 1958 was baptized into the full fellowship of the North Carthage Baptist Church where she remained a faithful member until death.

Mrs. Kemp was a retired teacher’s assistant to the late Minnie Lena Porter with the Smith County Special Education program.