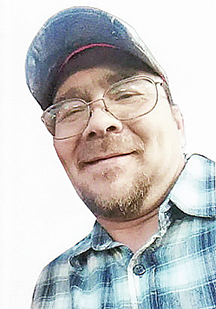 Mr. Scottie Slagle of the Hogans Creek Community was pronounced dead at 11:16 p.m. Sunday evening December 23, 2018 at the Riverview Regional Medical Center in Carthage after suffering an apparent fatal heart attack at his Ballinger Road home. Mr. Slagle was 45.

Mr. Slagle was cremated at Cumberland Family Services in Algood. There will be a Celebration of Life for Mr. Slagle on Sunday afternoon, February 10 at the Gordonsville Civic Center from 2:00 PM until 5:00 PM.

One of two children of Cecil Ralph “Bud” Slagle Jr. and Patricia Ann “Trish” Bowman Slagle of the Hogans Creek Community, he was born Scottie Howard Slagle in Carthage on January 2, 1973.

Mr. Slagle was an employee of the William L. Bonnell in Gordonsville for over nineteen years and at the time of his death was an independent contractor.

He was a 1991 graduate of Smith County High School where he majored in agriculture and his junior and senior years was a member of the V.I.C.A. club where he was enrolled in the auto mechanics program.

Mr. Slagle was preceded in death by a sister Tina Shanell Slagle who died at the age of 15 on May 20, 1992 as the result of a two car auto accident on Dixon Springs Highway.

Surviving in addition to his parents, Bud and Trish, is a son, Austin Lee Slagle of Red Boiling Springs, paternal grandmother, Clio Bilbrey Slagle of the Bradford Hill Community.