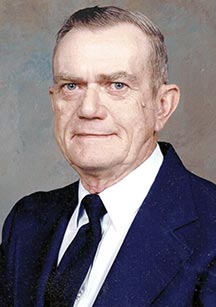 Joe Ford was born January 29, 1934 in New Middleton, TN, son of the late Joseph W. Carpenter and Mary Ford. He was also preceded in death by Sister; Betty Lewis. He graduated from GHS in 1952. Mr. Carpenter served his country in the United States Air Force. He married Alene McDearman on July 5, 1960. Mr. Joe Ford was a member of the Hickman Baptist Church.

Mr. Carpenter worked as an Air Traffic Controller for many years and also worked at Petrolane Gas Company, Cal Gas, Spar Gas, and for Service America. He was also a carpenter. Joe Ford enjoyed Antique Tractors, participating in many tractor shows in the area.

Funeral Services for Mr. Carpenter are scheduled to be conducted from the Gordonsville Chapel of Bass Funeral Homes on Monday, February 12, 2018 at 11AM with Mark Medley delivering the Eulogy and Bro. Mark Stinnett officiating. Interment will follow in the Gordonsville Cemetery.

Visitation with the Carpenter family will be held at the Gordonsville Chapel of Bass Funeral Homes on Sunday from 2PM until 7PM and again on Monday after 10AM until the time of the service at 11AM.

The Carpenter Family requests donations in Mr. Joe Ford’s memory be made to the Hickman Baptist Church.