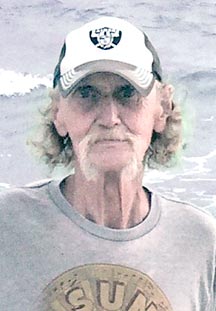 Mr. Max Grisham, a longtime resident of the Lock Seven Community died at 6:13 a.m. Friday morning March 16, 2018 at his Lock Seven Lane home from bone cancer with which he was diagnosed Thursday March 8th at Vanderbilt University Medical Center in Nashville. The 69 year old Mr. Grisham was pronounced deceased at 8:01 a.m. by High Point Hospice.

At Mr. Grisham’s request he was cremated and that was performed at Cumberland Family Services in Algood.

A Celebration of his Life was held Sunday afternoon March 18th at 1 p.m. from the Carthage Chapel of Sanderson Funeral Home with family and friends reflecting on his life.

One of two children, he was born Max Carter Grisham at the former Sam B. McFarland Hospital in Lebanon on February 28, 1949 and was the son of the late Leslie Carter Grisham who died from a work related accidental head injury at the age of 39 on February 20, 1955 when Max was only 5 and the late Dottie Mae Franklin Grisham Dillehay who died at the age of 76 on January 23, 1997.

On July 12, 1959 Mrs. Grisham was united in marriage to Defeated Creek Community native Mr. Clarence Adron Dillehay who died March 13, 1996 at the age of 76 and who was like a father to Max.

Mr. Grisham was preceded in death by a sister Mary Anne Grisham Parsons who died December 13, 1995.

He was a member of the Local Laborers Union #386 for thirty five years before retiring.

His job assignments as a concrete mason and finisher included the Hartsville Nuclear Plant, the Gallatin Steam Plant and the L. E. Myers Co. in Gallatin before his retiring in 2004.

Mr. Grisham was of the Pentecostal faith.

A talented musician, he was also a member of the original “Second Generation Band” which was composed of himself, Randy Dillehay and both the late Norman Reid and David Russell. After he left the group he was replaced by Terry Gibbs.

Surviving is his three children, Lesley Grisham Logan of the Lock Seven Community, Eric Grisham and wife Brandy of Mt. Juliet, Joanna Grisham and wife Jenny Harris of Clarksville; five grandchildren, Gracie Michelle Carver of Nashville, Harrison and Danielle Logan both of the Lock Seven Community, Xavier and Ava Grisham both of Mt. Juliet; the mother of their children, Debbie Ray Hale of Watertown.

The Grisham family has requested memorials to either the Nashville Rescue Mission or the St. Jude Hospital.