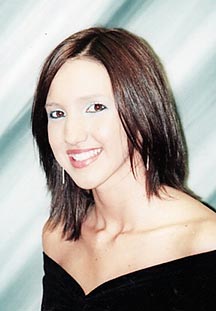 Ms. Brittany Mullins age 30 of South Carthage died at 3:43 p.m. Thursday afternoon March 22, 2018 at the St. Thomas West Hospital in Nashville where she was admitted Tuesday March 20th. Ms. Mullins was diagnosed with an astrocytoma brain tumor in April 2009 and had gallantly battled the disease since then.

Funeral services were conducted by Bro. Frank Bratcher and Bro. Matt Davis on Sunday afternoon March 25th from the Carthage Chapel of Sanderson Funeral Home. Following the 1 p.m. services burial was in the Garden of Everlasting Life at Smith County Memorial Gardens.

The daughter of Judy Ann Mathews Mullins Markham of South Carthage and the late Clayton Ray “Buddy” Mullins who died as the result of an automobile accident, also at the age of 30, on June 24, 1995.

Before becoming ill Ms. Mullins was a caregiver and also was employed by Prospect at Gordonsville.

She was a 2006 graduate of Smith County High School.

Ms. Mullins was a member of the Carthage First Freewill Baptist Church in the Tanglewood Community.