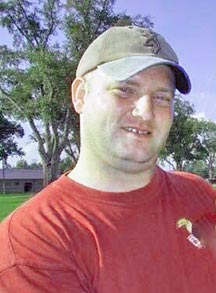 Michael Shane Maples, 41, of Sparta, Tennessee passed away on Wednesday, March 28, 2018 at his residence.
Born Friday, July 16, 1976 in Frankfurt , Germany, he was the son of Gary Maples and Martha Jane Brock. He retired with 20 years of service in the Army National Guard. He served during Operation Iraqi Freedom from June 2004 until December 2005.
Survivors include his wife, Amanda Lewis Maples of Sparta; sons, Stephen Weston Maples and Daniel Shane Maples of Sparta; daughter, Alexis Grace Kamryn Maples of Sparta; parents, Ron and Jane Bennett of Sparta and Gary and Frances Maples of Spencer; mother-in-law, Nancy Lewis of Smithville; brothers, Chip Bennett (Renee) of Cookeville and Jonathan Bennett (Kristina) of McMinnville; sister, Angie Maples of Spencer; and step brother, William Hall. Several nieces and nephews also survive.
He was preceded in death by his grandparents, Tad and Lucille Brock and brother, Gary Stephen Maples Jr.
Funeral services will be held at 2 pm on Saturday, March 31, 2018 at Oak Lawn Funeral Home with Steve Tiebout officiating. Burial will follow in Smith Chapel Cemetery with full Military Honors provided by the United States Army Honor Guard. The family will welcome friends at 10:00 am until time of the service on Saturday at the funeral home.
Online condolences may be made to the family at oaklawnmemorial.com
Posted in Obituaries