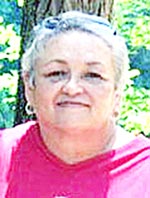 Terry was born March 24, 1957 in Gainesboro, TN, the daughter of the late Hugh Lee Quarles and Jo Clyde Kinnard. She was a 1975 graduate of Jackson County High School. Terry loved her family and enjoyed taking care of people.

Funeral Services for Mrs. Watts are scheduled to be conducted from the Gordonsville Chapel of Bass Funeral Homes on Thursday, April 5, 2018 at 1PM with Bro. Floyd Massey officiating. Interment will follow in the John L. Clark Cemetery in Gainesboro, TN.

Visitation with the Watts Family will be at the Gordonsville Chapel of Bass Funeral Homes on Wednesday from 3PM until 8PM and on Thursday from 10AM until service time at 1PM.

In lieu of flowers, the Watts Family requests memorials in Terry’s memory be made to assist with family medical expenses.