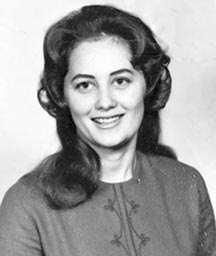 Mrs. Linda Hooper, a housewife of the Difficult Community, died at the age of 76 at 7:01 a.m. Wednesday morning April 4, 2018 at the Concordia Health and Rehabilitation Center in Carthage where she had made her home since September 18, 2014 suffering from dementia.

A service of remembrance will be conducted on Saturday afternoon April 14th from the Kingdom Hall of Jehovah’s Witnesses on Dixon Springs Highway in the Tanglewood Community at 2 p.m. Bro. David Turner will officiate.

The family will receive friends at Kingdom Hall on Saturday from 1 p.m. until the service time at 2 p.m.

The eldest of five children, Mrs. Hooper was born Linda Joyce Wakefield in Houston in Harris County, Texas on October 9, 1941 and was the daughter of the late Jack Slay Wakefield and the late Ida Norene Graham Wakefield.

In Liberty, Texas on April 12, 1958 she was united in marriage to Houston native Edward Marshall Hooper.

In 1981 Mr. and Mrs. Hooper relocated from Houston to Lebanon and in 1997 constructed their new home in the Carver Hollow in the Cartwright Community where they enjoyed many blissful years together before her illness began.

Mrs. Hooper had been a member of the Jehovah’s Witnesses for over sixty years.

She was educated in the Channelview, Texas School System.

Surviving in addition to her husband to whom she just lacked seven days of reaching their 60th anniversary are their three children, Marshallene Hooper Wortham and husband Alfred of La Porte, Texas, Armand Hooper and wife Tammy of the Kempville Community, Michael Hooper of Lebanon; sister, Velda Guidry, a brother Mark Wakefield both of Fort Smith, Arkansas; another brother Keith Shelton of Branson, Missouri; four grandchildren and five great-grandchildren.