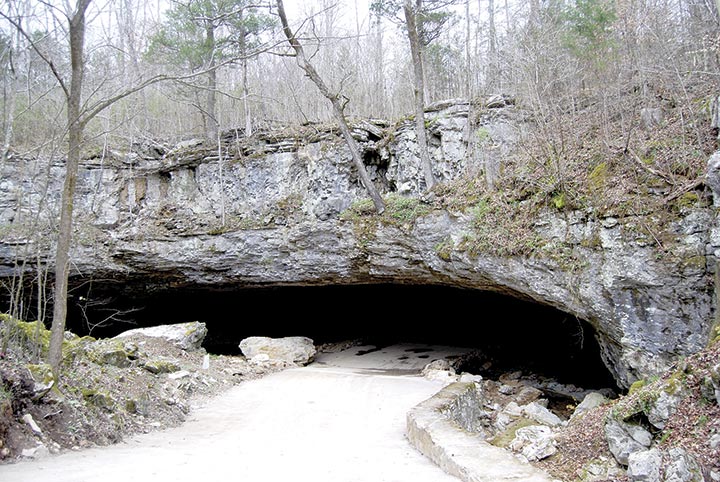 About 100 feet beneath a mountain of limestone, the yawning mouth of The Caverns compels the curious as well as those who love music to enter the newest, perhaps the oldest and maybe the most perfect subterranean concert hall in the world. Inside, “Bluegrass Underground” performers sing and pluck the strings of their guitars, mandolins, banjos and bass fiddles, producing sounds that are pure magic to the ears. “Absolutely fantastic. I think it’s amazing. I mean it feels really good in there,” says bluegrass prodigy Billy Strings of the acoustics. “Playing the music on the speakers on the PA, it sounded really good. It sounds crystal clear. I think it’s a great room. Something about the way it’s shaped and everything, the sound kind of like — you just get it right from the speakers.”

Welcome to a place historically known, mostly to spelunkers, as Big Mouth Cave. Located in Payne Cove near the base of Monteagle Mountain, the cave, with an entrance that stretches 140 feet wide and 20 feet high, boasts the largest show cave opening in the U.S. But the audio goodies are what wait below as on this last weekend of March, The Caverns became the permanent home of the PBS concert series, “Bluegrass Underground.” Opening day of the show’s eighth season couldn’t have gone much finer for its creator and cave owner Todd Mayo, as all 750 seats were sold out as folks packed the music hall to hear concerts by The Sweet Lizzy Project and Billy Strings. “When there were people in there and when the music started playing and the TV cameras were rolling, it went in the blink of an eye from a cave to a music venue. It was sublime, surreal and singular. It was absolutely amazing. There is nothing like it,” gushed Mayo. For the uninitiated, he describes the show, saying, ‘“Bluegrass Underground’ is a musical adventure that literally shines a light in the darkness on the quality and diversity of music, not only from America, but from all around the world. . . . It’s also a television show that shows all around the country on PBS. It’s a celebration of nature where you experience the great outdoors indoors. You step into those magic doors ….”