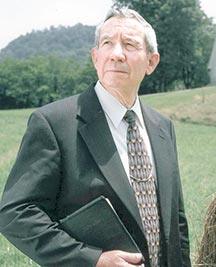 Longtime Missionary Baptist Pastor, Eld. Floyd Ferguson of Red Boiling Springs, died early Sunday morning April 8, 2018 at 6:45 a.m. at the age of 87 at the Macon County General Hospital following a period of declining health. He was admitted to the hospital on Wednesday April 14th.

The third child of fourteen children, he was born Floyd Wayne Ferguson in the Bethany Community of Macon County on February 26, 1931 and was one of four girls and ten boys of the late Lucian Myers Ferguson and Dessie Mae Copass Ferguson.

On January 26, 1957 he was united in marriage to Walnut Shade Community native, the former Bessie V. Gregory.

Eld. Ferguson was saved on July 28, 1946 at the age of fifteen after attending a revival at the Bethany Missionary Baptist Church and testified that he went home from the revival, went upstairs and fell across the bed and there the Lord saved his soul. He was baptized by the late Eld. Luther Stewart on August 14, 1949 unto the full fellowship of the Bethany Missionary Baptist Church.

During his commitment to the Lord to serve him, he preached 4,655 sermons, participated in 222 revivals and baptized 350 souls, preached 376 funerals and married over 125 couples.

His church membership had remained at the Bethany Missionary Baptist Church although he had pastored many churches.

In addition to being a devoted husband, father and grandfather, he had a great number of friends both in the church, which he loved so dearly, and in the community.

Eld. Ferguson was a lover of God’s earth, enjoyed gardening, the warmth of a wood burning stove and reminiscing about life and sharing life’s stories especially about his only grandchild and how great she was at showing cattle at fairs and exhibitions.

The Ferguson Family requests memorials to either the Bethany Missionary Baptist Church or the Tennessee Farm Bureau Ag in the Classroom or the charity of your choice.

This obit provided as a courtesy to the Ferguson family.