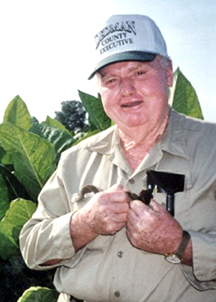 A well respected Wilson County agriculturist and Bellwood Community farmer, Mr. Newell “Red” Jenkins died Thursday afternoon May 24, 2018 at the age of 88 at 4:49 p.m. at the Vanderbilt University Medical Center in Nashville.

Funeral services were conducted on Monday afternoon May 28th from the Chapel of the Ligon & Bobo Funeral Home in Lebanon. His present pastor Bro. Mike Shelby and his longtime pastor Bro. Glenn Denton officiated at the 2 p.m. services and burial was beside Mr. Jenkins wife in the Bethlehem Cemetery in the Tuckers Cross Roads Community.

He was also preceded in death by a son, Darrell Jenkins and a son-in-law Greg Marsh.

At the age of six Mr. Jenkins father purchased him and his brother Haskell little red wagons to haul corn to the hogs and Red stated they wore those wagons out hauling corn to the hogs.

When he was 7 and Hack was 9 they had their first tobacco crops.

Mr. Jenkins father owned and operated a sawmill in the Rawls Creek Community and at the age of 14 he began hauling logs to the mill.

He and Mrs. Thelma lived in the Rome Community from 1948 until 1955 when he purchased 235 acres in the Bellwood Community from Mr. Sam Patton Thompson. In 1966 he purchased another 110 acres from the Will Harlan estate and later purchased 43 acres of the Elam farm that fronted Carthage Highway and Sugar Flatt Road. The 388 acre farm is still a working farm operated by his grandson Aaron.

In 1962 Mr. Jenkins purchased a rock and lime business in the Rome Community from the late Charles Oldham. When the I-40 construction project began he furnished all the rock for the bridge piers and beams for the ten bridges that cross the Caney Fork River between Gordonsville and Buffalo Valley. He later got out of the rock business but operated Jenkins Lime Service for a total of fifty years.

In 1973 he was named the Wilson County Conservation District’s top conservation farmer in the Goodyear Tire and Rubber Co.’s annual soil and conservation awards program.

Over a period of years, he established over 300 acres of improved pasture, eight farm ponds, one fishpond and six acres of grass waterways.

Again in 1997 he was awarded the Wilson County Conservation “Farmer of the Year”.

He was a noted leader and member and held numerous leadership positions in the Tuckers Cross Roads Grange and was a longtime supporter of the Wilson County 4-H programs and the University of Tennessee Extension Service.

One of his crowning achievements was when in 1996 he hosted the National Association of County Agricultural Agents on his Wilson County farm.

For many years he and his wife attended nightly the Wilson County Fair and would sit on one of the white benches at the entrance and there they would greet their friends and neighbors attending the fair.

In 2007 he was honored to be named the Wilson County Fair “Old Timer’s” award.

He was a member of the Hillcrest Baptist Church in Lebanon.