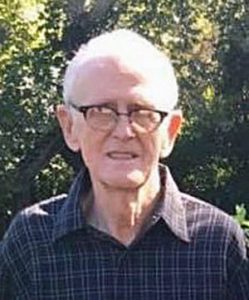 Carthage native Kenneth C. Porter and now of Bakersfield, California, died peacefully at his home at the age of 85 on June 18, 2018 with his loving family at his bedside. He was suffering from alzheimers.

Mr. Porter was cremated and a memorial service will be held at a later date to be announced.

He was preceded in death by a sister, Elizabeth, and brothers, Tom Porter Jr. and Jim Porter.

In 1951 he graduated from Smith County High School where he was a member of the Spanish Club, International Relations Club, Beta Club and his ambition at that time was to be on of Uncle Sam’s little boys, a goal he accomplished. It was said of him in the annual his senior years that: “The greatest business of life is to be, to do, to do without, and to depart”.

Certainly he followed his dreams.

He was united in marriage in Carthage on August 9, 1952 to the love of his life, Chestnut Mound native the former Ruby Jean Blair, who was the daughter of the late Carthage barber Bonnell Blair and longtime nurse Eula Summers Blair. Mrs. Porter preceded him in death on April 5, 2018 while undergoing heart surgery.

Mr. Porter proudly served our country with the United States Navy and served on the USS Philippine Sea aircraft carrier from 1951 thru 1954 as an aviation machinist mate.

He was employed by ARCO Oil & Gas his entire working career.

His job located him in Taft, California, Kenai, Arkansas and Walsenburg, Colorado.

He was also instrumental in bringing a gas line plant online in Turkey during his storied career.

The Porter family requests memorials to either the Alzheimer’s Association or the American Heart Association.

This notice provided as a courtesy to the Porter family.