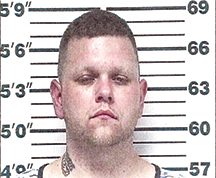 ONE ARRESTED IN PONTOON BOAT THEFT
Suspect Wanted In Indiana

Law enforcement authorities have charged a man for allegedly stealing a pontoon boat and selling it in Kentucky. On June 20, Pea Ridge Road resident Debra Rankin reported her family’s 20 foot Godfrey Partycraft pontoon boat was missing from a storage area.

The pontoon boat was taken sometime between June 6 and the day it was reported missing. On June 29, the sheriff’s department was notified, through NCIC computer the serial number for the missing boat had been registered in Kentucky.

Through a sheriff’s department investigation headed by Sgt. Dusty Hailey a suspect was determined. Jordan William Colburn, 32, Lebanon, was charged with theft between $10,000 and $59,000 in connection with the missing pontoon boat.